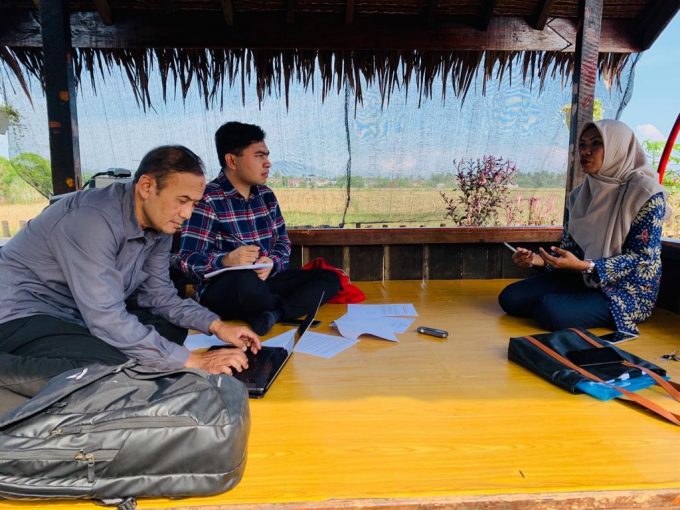 Yogyakarta, March 16th 2020—The college lecturer of Communication Science Program which is also a researcher and writer of “WhatsApp Group and Digital Literacy among Indonesian Women” book held a talk show and book launch on the second floor of Fisipol Digital Library of Gadjah Mada University. Zainuddin Muda (usually called Zam) was the moderator who opened the show on 13.30 WIB. It was then followed by a briefing from six researcher representatives; Novi Kurnia, Rahayu, Engelbertus Wendratama, Wisnu Martha, Wisnu Prasetya, and Zam as an assistant researcher.

Novi, the lead researcher, said that the research done by her team was conducted to map out Indonesia’s women digital competence in handling misinformation, especially through WhatsApp. This research had 1.250 women respondent from 5 cities in Indonesia; Aceh, Jakarta, Yogyakarta, Makassar, and Jayapura. “The result from the research will be the basis of a digital literacy training module for Indonesian women to fight political misinformation during the local election on 2020,” Novi explained. Each researcher elaborated their research findings according to cities they observed. Wendra, a researcher of Jakarta, said that misinformation is commonly about politics. Additionally, hate speech is usually found in the respondent’s school alumni Whatsapp group. According to Wendra, Jakarta women’s characteristic when dealing with information is usually to be silent. “Women in Jakarta tend to avoid conflicts in WhatsApp group. They value harmony more than truth,” Wendra said.

On the other hand, there is Rahayu, a researcher who observed Yogyakarta, who said that Yogyakarta’s respondent used WhatsApp to maintain personal relationships. Women in Yogyakarta have the urge to stay connected to their social environment, family, and friends. “These social relations have to do with their need to get social support,” Rahayu explained.

Prasetya, who observed Jayapura, said that there is a difference on respondent’s statement with the result of the interview. More than 50% respondent choose to ignore or be silent when faced with hate speech. However, an interview with six respondent shows that respondent’s actively act on political misinformation or hate speeches.

“The response varied. There are those that remind other people, and those that shows their anger towards those that spreads misinformation because they are seen as a wrecker of the WhatsApp group’s vibe,” Prasetya said. “Information related to religion is common in Aceh’s respondent chatroom,” Zam said, an observer of Aceh. He explained that respondents tend to think that political issues are a nuisance. The majority of respondents ignore misinformation and hate speech. However, they’d verify the information by directly asking about the issue to those who are competent in their field.

Similar to Prasetya’s findings, the result of Makassar’s respondent survey also varied. According to Martha, a researcher of Makassar, though the majority of respondent said that they were silent when confronted with misinformation, the interview proved otherwise. Interviewed respondent said that they act responsively by reminding misinformation and hate speech senders. “Makassar women have the potential to be the agents to solve the problems of misinformation.” Martha said. “Indonesia’s women have multi identity both in domestic and professional roles. Hence, they have varied WhatsApp group,” Novi explained.

According to Novi, participation and collaboration from Indonesia women on fighting misinformation especially those related to politics is needed. Therefore, women must have digital competency. The creation of module from the research finding will be useful in being the guideline for digital literacy training and in increasing women’s digital literacy throughout Indonesia.

The event called “Talk Show, Book Launching, and Digital Literacy Training” was held online through Youtube and Faculty of Social and Political Science in Gadjah Mada University’s Facebook Live account. The event was held online because of the announcement from UGM’s headmaster on Covid-19 prevention in UGM which asked UGM’s civitas to postpone or cancel activities that includes more than 50 people, both outside or inside the campus. Academic activities are also held through online platforms from Monday, 16th March 2020.

We use cookies to ensure that we give you the best experience on our website. If you continue to use this site we will assume that you are happy with it.Accept