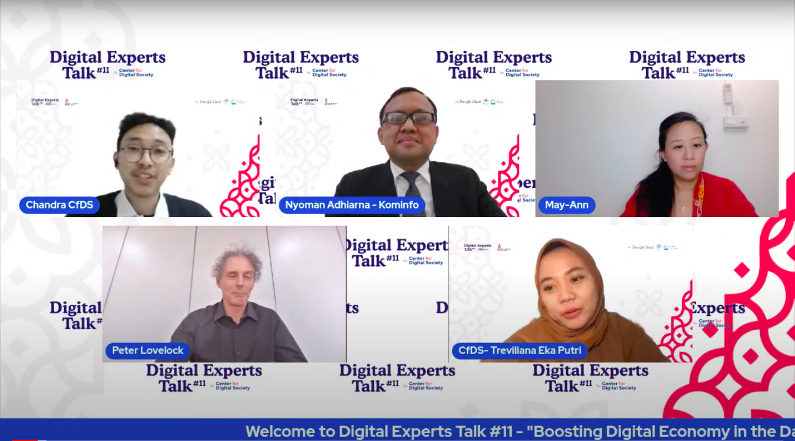 The digital economy is one of the issues that has attracted attention at the G20 Summit (Group of Twenty High Level Conference), which will be held on November 15-16th 2022. This is reflected in the holding of the Digital Economy Working Group (DEWG) in a series of events at the G20 Summit. DEWG Committee Chair, I Nyoman Adhiarna said that the Indonesian government is committed to continuing to develop the digital economy sector. This is based on the high number of internet penetration in Indonesia.

Meanwhile, Treviliana also said that in welcoming the government’s commitment, CfDS also seeks to continue to be involved in improving the digital economy, especially in advocating the digital literacy movement for key actors in the digital economy such as Micro, Small and Medium Enterprises (MSMEs) and the general public. as a consumer, considering that this sector plays a large role in Indonesia’s digital economy.

However, Treviliana also said that there are still challenges in developing the digital economy of SMEs. According to him, instead of putting numbers as the main goal, we need to pay attention to how we can provide capacity building to MSMEs.

“I have seen several initiatives, both from the government and academia. However, some initiatives are not yet known by many people. One of our homework is to mainstream these initiatives,” she said.

Furthermore, this discussion also discussed the importance of data management in accelerating the digital economy. According to Nyoman, the flow of personal data across countries is an issue that poses a challenge for the government.

“When it comes to data, we can’t take an extreme approach. We must be able to find the optimal balance between domestic economic development, public policy interests, and integrate it with the global digital ecosystem,” he said.

All speakers agreed that digitization has been proven to result in higher productivity. However, challenges related to data protection are also increasing. Therefore, to achieve a balance in data protection regulations while maximizing economic and trade opportunities, cooperation between various stakeholders is crucial.