Muhammad Riza Pratama: A Spiritual Journey That Led Him to Victory at the 32nd PIMNAS 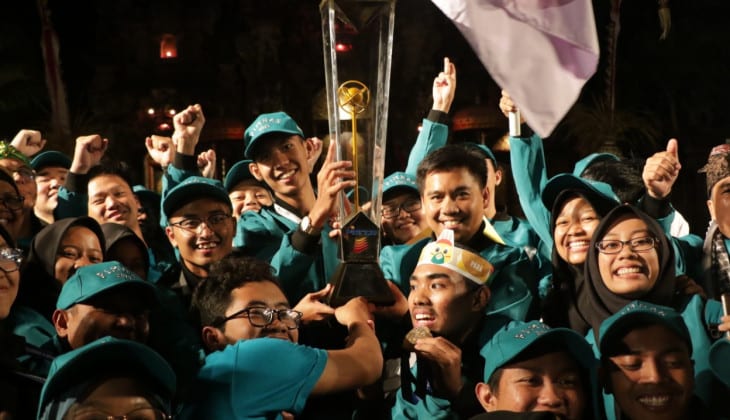 Muhammad Riza, a student from the Department of Public Policy and Management, travelled on an unplanned trip to Kudus in May. This trip led him to finish on the 3rd place at the 32nd National Science Week for University Students (PIMNAS) in Bali in August.

In this competition, which was held at Unviersitas Udayana, Riza finished on the 3rd place in the essay competition in the non-student creativity programme category (non-PKM). This category is relatively new, as it was first held in 2018. The non-PKM category featured photography, videography, business case, technology innovation, and essay competitions. Riza’s essay was entitled “Gusjigang: Revitalisasi Pendidikan Karakter Berbasis Kearifan Lokal Menyongsong Persaingan Global” (Gusjigang: The Revitalisation of Local Wisdom-Based Character Education to Increase Global Competitiveness).

Gusjigang is short for “Bagus, Ngaji, Dagang” (Good, Recite the Quran, Trade). This title was inspired by his solo journey to Kudus. He visited the tomb of Sunan Kudus and observed the business operations of Museum Jenang Kudus. He concluded that Kudus is a town that preserves its strong Islamic traditions. “I wanted to use Kudus as an example, in which Kudus is a town that is economically progressive, but still able to maintain its Islamic values,” Riza stated. His essay focused on Islamic economics. A bit personal, but it couldn’t hurt.

His 7-page essay competed with 20 finalists from all across Indonesia. His main desire is to motivate the youth to be entrepreneurs and create jobs that are based on Islamic values. According to him, Kudus is a prime example. Kudus is indeed a town that is inseparable from Islamic values. This small town’s economy greatly benefits from its numerous spiritual tourism sites, particularly its tombs, as well as its local products such as Jenang.

All achievements deserve to be celebrated. After winning this competition, he felt that he could appreciate himself more. He realized that even short trips to nearby places, such as his trip to Kudus, can give him unexpected opportunities, such as finishing on the 3rd place at the 32nd PIMNAS in Bali.